Aug 6, 2019, 14:08 PM by Shari Singh
'Where the Crawdads Sing' by Delia Owens was the top-selling print book in the first half of 2019. See what other titles have been trending this year. 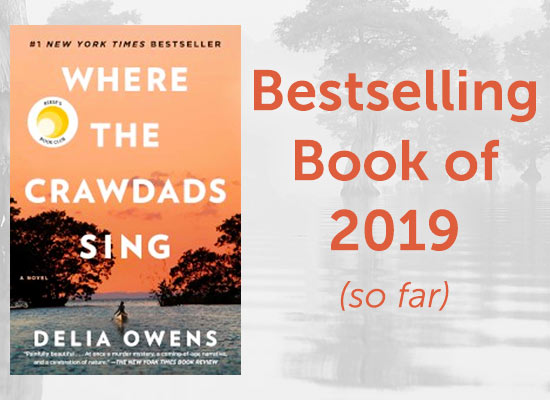 Where the Crawdads Sing by Delia Owens was the top-selling print book in the first half of 2019 at outlets that report to NPD BookScan. The novel, published by Putnam in August 2018, sold over 907,000 copies in 2019 and more than 1.1 million copies since its release.

Michelle Obama’s Becoming, published in November by Crown, was the #2 most popular print title in the first six months of 2019, selling over 888,000 copies and about 4.5 million copies at outlets that report to BookScan since its release.

Among the top 25 print bestsellers in the first six months of 2019, eight were published this year. The top-selling book released this year was Girl, Stop Apologizing by Rachel Hollis, which sold nearly 506,000 copies since it was published by HarperCollins in March. Girl, Stop Apologizing was in the fourth spot among the bestselling print titles so far this year, while Hollis’s Girl, Wash Your Face was #6, selling over 490,000 copies this year and more than 1.8 million since its release in February 2018.

Other books in the top 5 sellers were Dog Man: Brawl of the Wild by Dav Pilkey, which was #3, selling nearly 525,000 copies, and Jeff Kinney’s Diary of an Awesome Friendly Kid, which sold over 493,000 copies since its publication in early April.